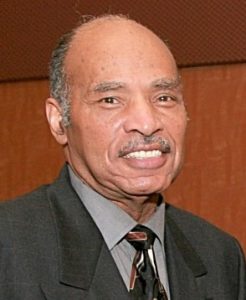 This year’s Tribute Breakfast will be the second year for the Ernest Lofton Junior Goodfellow of the Year award, in honor of the longtime Detroit Goodfellow, and United Auto Workers labor leader, who worked tirelessly to advance the Goodfellow organization’s effort to help the children of Detroit. It will recognize young community members who make a positive difference. The award pays homage to Ernest “Ernie” Lofton who passed away in 2016.

He was a truly special person and an exemplary Goodfellow who was a recipient of Goodfellow holiday packages as a child and later became a Goodfellow of the Year honoree. He was involved in the organization for many years on many levels, and especially with the Tribute Breakfast. The Junior Goodfellow Award will honor his legacy as part of future breakfasts.

To submit a nomination, email Sari Klok Schneider at sarigoodfellows@gmail.com by September 7 naming your candidate and why you think he or she should be recognized with this honor. Please be sure to include your name, email address and phone number.

Nominees should be ages 13 through 18 and have performed community service or other volunteer activities helping people in need.   They should reside in Detroit, Hamtramck, Highland Park, River Rouge or Haper Woods (the communities the Detroit Goodfellows serve).

Entries are due by Friday September 7 at 5 pm.  We will announce the Second Annual Ernest Lofton Junior Goodfellow of the Year at the 2018 Goodfellow Tribute Breakfast on Tuesday, September 25 at 8 am at Cobo Center.